With experience of real lock down in submarines, lock down at home for Covid 19 caused me no stress. In fact, it has been brilliant. I hate going shopping and would never think of going down to a pub for company. I have treated lock down as if I were going on a two month patrol and set myself a list of tasks to complete before it ended. One was to put a roof extension on the logstore. I did. The following evening I walked into it. 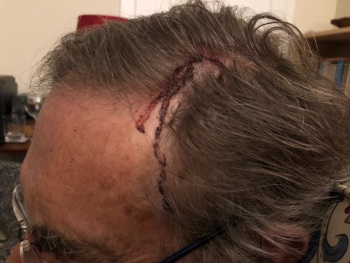 It is surprising how much we do from mental models* rather than by visual reaction. Ever found yourself feeling for the phantom gear stick in a new car or tripping over something in the dark that didn't used to be there?

Bats live by sound, not sight. In one experiment a bat was put in a divided chamber with one third of the partition opened up only at meal times to let it through into the other half for food. When first introduced, the bat went round pinging like mad until it had built up a picture it in its memory. Thereafter, it pinged very little. It was familiar with its surroundings. Then the researcher moved the opening in the partition to the other side and the bat flew into the closed side of the partition.

I was that bat. Who the hell put a roof extension on the old logstore?

* By 'mental model', I mean a memorised picture, not a mad manequin.